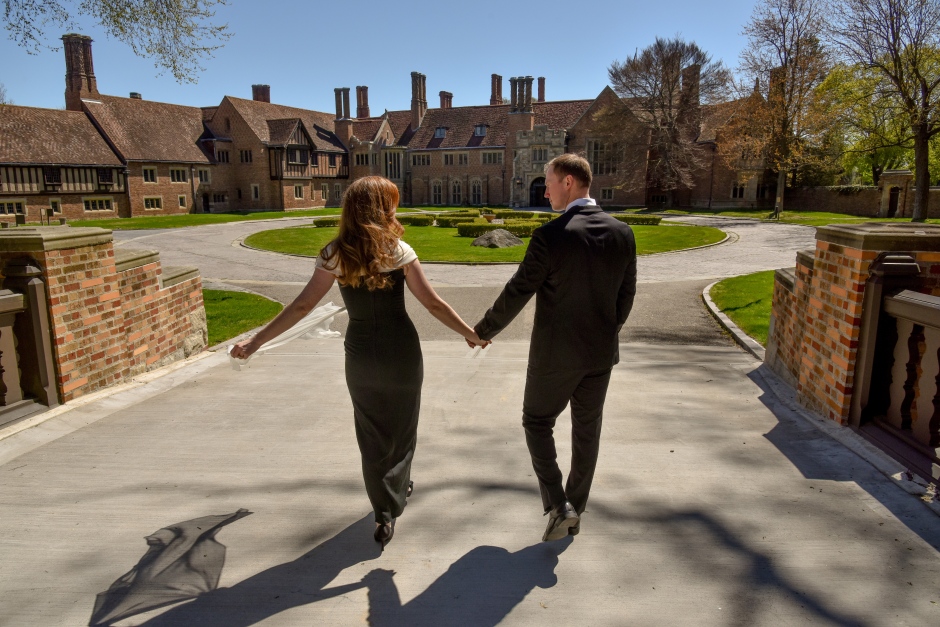 I looked at my reflection in the mirror and smiled. Mentally noting every little detail, my favorite black sweater that I overwear, my hair curled in the “Carmen San Diego” style that Mr. H loves, and the butterflies that seemed to be taking flying lessons in my stomach. You see, I was about to get engaged.

But lets backup a little bit.

Back in October Mr. H had whisked me away to NYC to do some diamond shopping.

It was so so special for him to include me in the process. I know not everyone does it that way, but it was perfect for us. Y’all should have seen me floating around NYC. Haha! I ended up falling in love with radiant cut diamonds and because we wanted to do a custom setting to compliment my great grandmother’s wedding band, we decided to order the diamond we wanted first and then we would work on finding a company to set it. We were were in the process of finding someone to set it for us when we decided we actually wanted to get married. It makes me laugh every time I think of how we went from dating to “oh let’s get married in two weeks, oh and we should probably get engaged too”. It’s just SO “us”… we love a good plot twist. I knew we wouldn’t have the ring set and all ready to go before the wedding, but that was okay since really the only thing that mattered to me was that I got to marry the man of my dreams. I figured he would propose somehow… someway… with just the loose diamond? Who knew… Little did I know what he had already planned.

Now back to December 5th.

We were getting married in 6 days and when Mr. H told me to get dressed up I knew it was going to happen that day.

I say I knew, but really it was just a very educated guess. But I KNEW knew when I walked into my dining room, which he hadn’t allowed me into all morning, and saw all of my beautiful family china set perfectly on the table with what can only be described as a feast from Maggiano’s set out. Gorgeous roses were handed to me and I was ushered to sit. I watched in awe as he served me and looked at me as if I was made of gold. It was gloomy outside, but the radiators were whooshing and my Christmas tree was glittering as we ate. It was so cozy and idyllic.

He announced that he was taking me downtown and to wear something warm. I started wondering what exactly he had planned.

I don’t think a drive has ever taken so long. I wanted desperately to know what we were doing and where we were going. Finally we pulled up to my FAVORITE bakery, Cannelle by Matt Knio. I should probably note at this point that in Michigan everything was locked down. We weren’t allowed to go into any restaurants so that’s why he set out Maggiano’s at home for us and why he was now running in to pick up the pastries.

He jumped back into the car with 6 chocolate croissants. 1 is practically a meal, but 6… you couldn’t eat that if you tried. It made me smile at how excited he was and how he definitely seemed to have the mindset of “go big or go home”. He then announced that we were going to drive through my favorite historic neighborhood and look at all of the Christmas lights while listening to my favorite 1950’s Christmas music.

As we’re driving, we near the restaurant that we had our first date at. I knew immediately that this is where “it’s” going to happen. We park, get out and I grab his hand as we walk over to the entrance. Of course the restaurant is closed, but we took a picture in front of the awning.

He then leads me over to the waterfront. The very same waterfront, overlooking Canada, that a certain young and very handsome man kissed a southern redhead at the conclusion of their first date almost 5 years prior. I walked over to the railing and he stood behind me holding me closely. He loosened his grip and turned me to face him and he knelt down on the ground. With the wind blowing fiercely and tears streaming out of my eyes, Mr. H pulled out the ring box and asked me to be his wife. I am sure he said more than that, but I really don’t know. I was to busy leaping into his arms and giving him the biggest kiss and the biggest YES!!!!!!!!!!!!!!!!!!!

I couldn’t stop crying tears of joy and felt like my heart could just explode with happiness. We took a picture at the waterfront, a picture I’ll cherish forever…

And then I pulled out the diamond to carefully slip it onto my finger. Since we hadn’t had it set due to the…. well you already know, it was precariously sitting in a jaw clip ring, but I still wanted to have a picture of it on my hand even if it wasn’t in its forever state yet.

I put it back in the box and we started to walk back to the car. As I clutched the ring box I made a comment about how many giant salt crystals there were on the sidewalk and how horrific it would be if our beautiful diamond were to fall amongst them. (Why am I the way that I am?) As I was rambling about how many hours it would take to ever find the diamond again Mr. H swiftly grabbed the ring box from me and stashed it safely in his pocket. I don’t usually see panic in his eyes, but that definitely was a panicked moment.

With the ring safely tucked away we settled into the car and drove through the historic neighborhood as I yelled over and over “I’M A FIANCE” at the top of my lungs. I would like to think that that added the perfect romantic touch to the scenic drive.

I have to also add that while I posted sneaky little pictures throughout that whole magical week in December, everything from the trip to NYC, to getting engaged, to the wedding in Pittsboro was our moment and ours alone. That might not be how anyone else in the world wants to do it, but for Mr. H and I, having the space to savor every single moment and cherish the intimacy of such a monumental event as getting engaged and married is… well we couldn’t be happier that we chose to do it that way.

One month from getting engaged I was able to pick up my completed ring from “Wilson Brothers Jewelry”. I couldn’t believe my eyes when they gave it to me and I slipped it on my finger. How on earth was something this beautiful mine? I almost cried. It was so worth the wait to have it done perfectly. The people at the store went above and beyond to take care of us and make sure everything was perfect. I can’t recommend them enough.

Now I know I could’ve posted all about it then, but for as long as Mr. H and I had been together we had dreamed of taking a trip to Ireland as our engagement celebration trip and taking our engagement pictures there. Sure we were already married, but I’ve said it before and I’ll say it again, we don’t like to do things normally! Haha! We waited to see if anything would open up and when it became clear that it wasn’t going to anytime soon we relinquished that idea and decided to do it at Meadowbrook Hall in Michigan. We do after all, have the rest of our lives to take pictures around the world. My parents graciously agreed to take our photos which was such a blessing. My dad really could be a professional photographer. My mom too. They took our wedding photos, my dad using his fancy camera and my mom using her phone and the result blew us away. So we knew they would knock it out of the park with engagement photos and no surprise… they did.

I wore my high school prom dress and I think Mr. H looked resplendent in his suit.

The Stuart Weitzman shoes that I got at an estate sale for $3 was the perfect finishing touch.

As always I so appreciate having this little corner of the internet to share my heart on. And I so appreciate you dear reader, for reading! Next up… a blog updating y’all on all of the fun details for the wedding celebration this Fall.

2 thoughts on “Our Engagement Story”